For Whang Bo-Ryung, music, art, and style are all separate channels that together weave an intricate web, and while on the surface appearing dark and jaded, it represents someone who is comfortable with herself and tells the gloss to fuck-off. 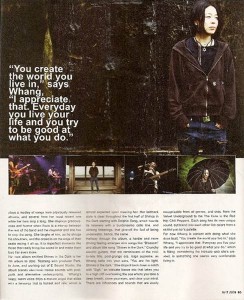 For Whang Bo Ryung, music, art, and style are all separate channels that together weave an intricate web, and while on the surface appearing dark and jaded, it represents someone who is comfortable with herself and tells the gloss to fuck-off.

A product of punk culture and down-with-the-scene kids, Whang appears tough–sporting a lip ring, multiple necklaces, bracelets, and other accessories. She wears drop-crotch jeans, a black hoody, and black Chuck Taylor’s to a rainy photo shoot near Hongdae. No glitz. No glamour. With her, it comes down to the simple task of portraying herself in the most honest light possible. With style and music.

“You try to be cool, you try to be different from everybody, and you end up being the same.,” she says.

So, while Whang puts on a tough exterior, the moment you start talking with her, you know just how laidback and down-to-earth she really is.

Art and musical inspiration come at odd times so she keeps a sketchbook close by for whenever inspiration shows its elusive face. “Every artist lives only for the narcotic moments of creative bliss.,” she quotes from 2005 mystery/spoof film Art School Confidential. “It’s something that has really stuck with me, and it doesn’t matter if it’s big or small, it’s all in you.” She goes on to explain how “every individual is a great big filter,” we are constantly observing, taking in our surroundings, and for her, music and art are the medium in which she throws it back.

Back in the late 90s and early 2000s, Whang was generating some attention for her music, but then decided to go back to school in the U.S. After earning her degree in Fine Arts from Pratt Art institute in Brooklyn, New York, Whang again began pursuing music more seriously. She (returned) to Seoul about three years ago, and hasn’t looked back since.

With her latest album only a few weeks old and a fan base that is gratful for her prodigal return, it’s easy to sense a certain excitement in her voice both on stage and off. ” I know what I want to do.” Whang laughs nervously, as she takes a short drag off of her Marlboro Red, “10 years ago I didn’t know, but now I’m fully into it.” On stage she is focused, and intense. She plays frequently and likes to hang out at Mudaeryuk–a coffee shop/bar by day and a great little venue for live music by night. In this small intimate space, she interacts well with a sizable crowed that crams the small spaces. Whang play a medley of songs from previously released albums, and several from her most recent one while her fans sing a long. She displays graciousness and humor when there is a mix-up between the rest of the band the drummer and she has to stop the song. She laugh at him, as he shrugs his shoulders, and the crowd is on the edge of their seats eating it all up. It is imperfect moments like these that really bring the crowd in and make them love her even more.

Her new album entitled Shines in the Dark is her 4th album to date. Teaming with producer Park, In June, and working out of E Sound Studio, the album blends electronic trance sounds with postpunk and alternative undercurrents. Whang’s raspy, warm voice drips a mature angst that sides with a fervency that is honest and raw, which is almost expected upon meeting her. Her laidback style is clear thrughout the first half of Shines in the Dark starting with Dolphin Song, which haunts its listeners with a burdensome cello line, and clinking tinkerings, that give-off the feel of being underwater, hence, the name.

Halfway through the album, aharder and more driving feeling emerges with songs like “Blossoms” and album title song “Shines in the Dark”. Crunchy electric guitars, that are reminiscent of the mid-to-late 90s, post-grunge era, regin supreme, as Whang belts into your ears, “You are the light, Shines in the dark”. She drops it back down a notch with “Sigh”, an intricate trance mix that takes you to a high cliff overlooking the sea where you take a deep breath, close your eyes, and clear your mind. There are influences and sounds that are easily recognizable from all genres, and eras, from the Velvet Underground to the The Cure to the Red Hot Chili Peppers. Each song has its own unique sound, but blend into each other like colors from a skillful painter’s palette.

For now Whang is content with doing what she does best. “You create the world you live in.” says Whang, “I appreciate that. Everyday you live your life and you try to be good at what you do.,” which is fitting, and considering the intricate web she’s created, is something she seems very comfortable living in.